After visiting city environments over the last few days it was time to do the opposite and we headed back to the coast for a free night at Cullera and parked opposite the beautiful, deserted beach. Walking across the wide sandy bay we chatted over a drink to some British expats who had lived in the area for the last 35 years, before returning to Bessie to watch the sun go down out of our front window. 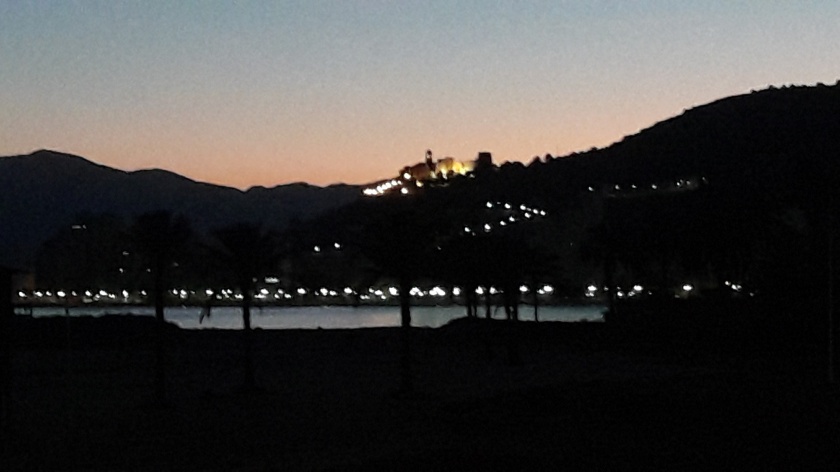 Moving to a campsite at Gandia early next day I was excited and nervous at the same time. In my quest to learn to speak Spanish, using the internet I found a penpal who lives in a village near to Gandia, I was about to meet Vicent and his wife who were going to visit us at the campsite. I have been writing to Vicent for about 5 months, I write in Spanish and he writes back in English. He is a year younger than me and this year at his 60th birthday on 9th November he retired from teaching at a junior school. When our messages started they were quite short and now we can both write a few paragraphs, we had exchanged a photo so we would know who to look for, and at the appointed time met at the campsite bar. It was scary thinking we would not be able to say much to each other but we managed ok for 2 hours! I thought Vicent had learned a good amount of English and I managed at least some Spanish and Chris could also say somethings too so we enjoyed our time together. It was a good meeting and he kindly gave us a bird book with the Spanish names and a small reading book for me to practice with. We will continue to email and meet up again next time we return to the area. 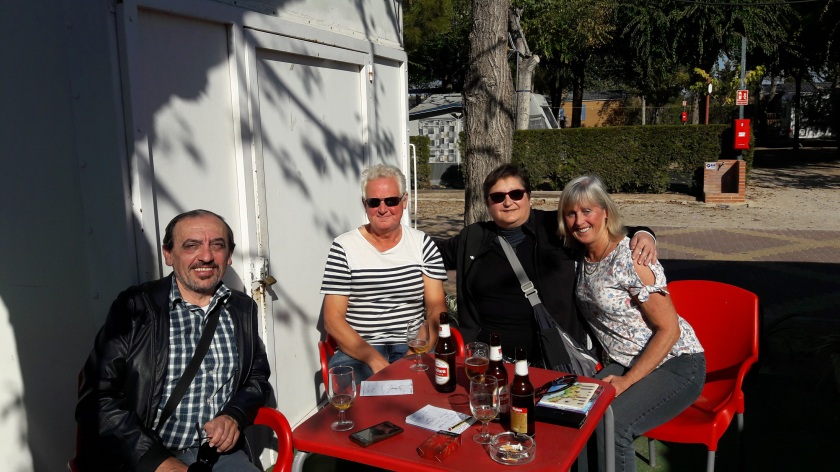 We moved further south to Denia on the coast and chose a pretty campsite. It had parking under pine trees with individual parking areas defined by small hedges and trees, not in rows but in random positions so it actually felt small and intimate. It was only 5 minutes walk from the beach with a rustic promenade and a few bars on the headland where we saw octopus drying on a frame. The rough rocks changed to a beach with a perfect sandy curve leading all the way to the marina. There was a lovely promenade, a sculpture of dolphins, flowers and restaurants, and a long pier which we walked along the whole length and watched men fishing while boats went out to sea or returned to the marina. 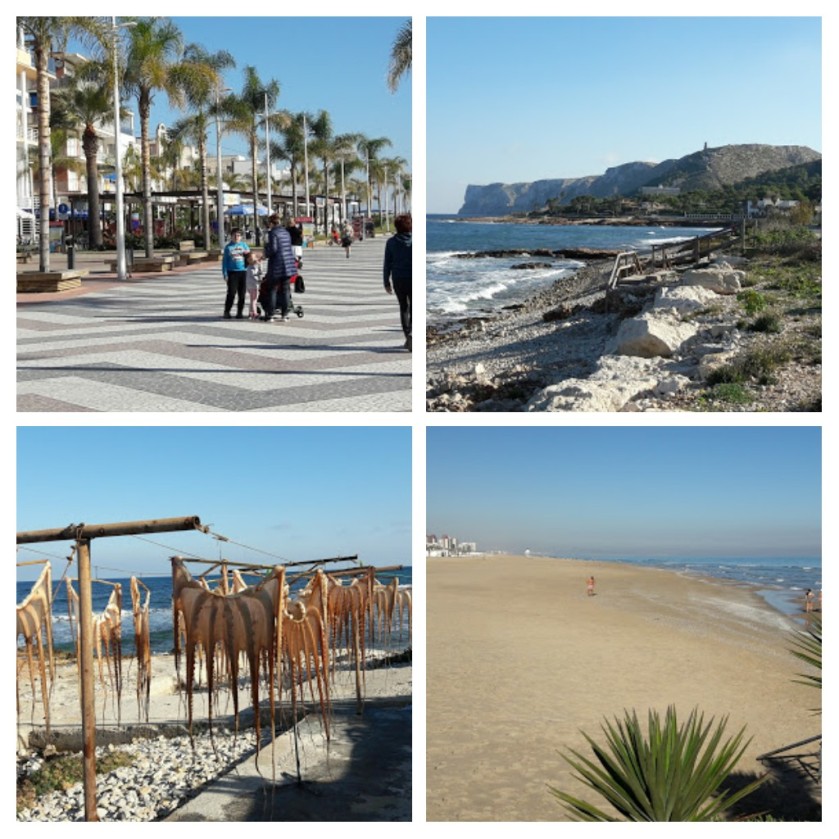 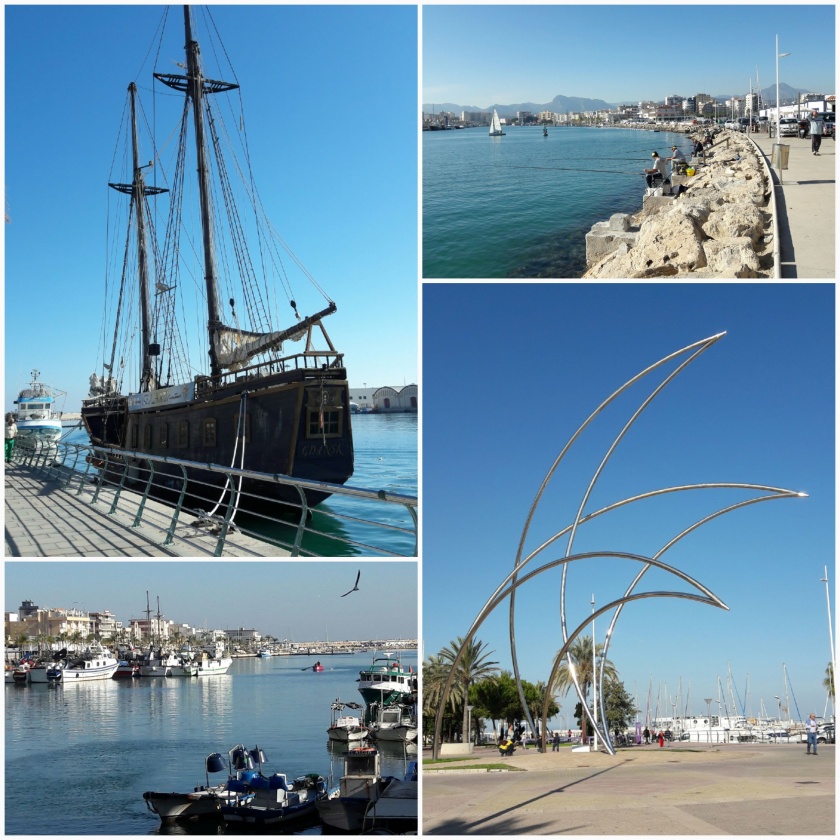 We always walk a lot as Bessie stays on the sites, so it was on shanks’s pony as usual that we decided to see what was beyond the marina. We made our way up hill to the ‘castle’, it only cost 2 Euros each and although the position gave far reaching views down over the marina and across the bay, it really was a pile of old stones, a few walls and two storage urns. There was not much definition of the old building except one part they were renovating, the information boards were in a pile on the floor and the few remaining ones were devoid of any script at all. 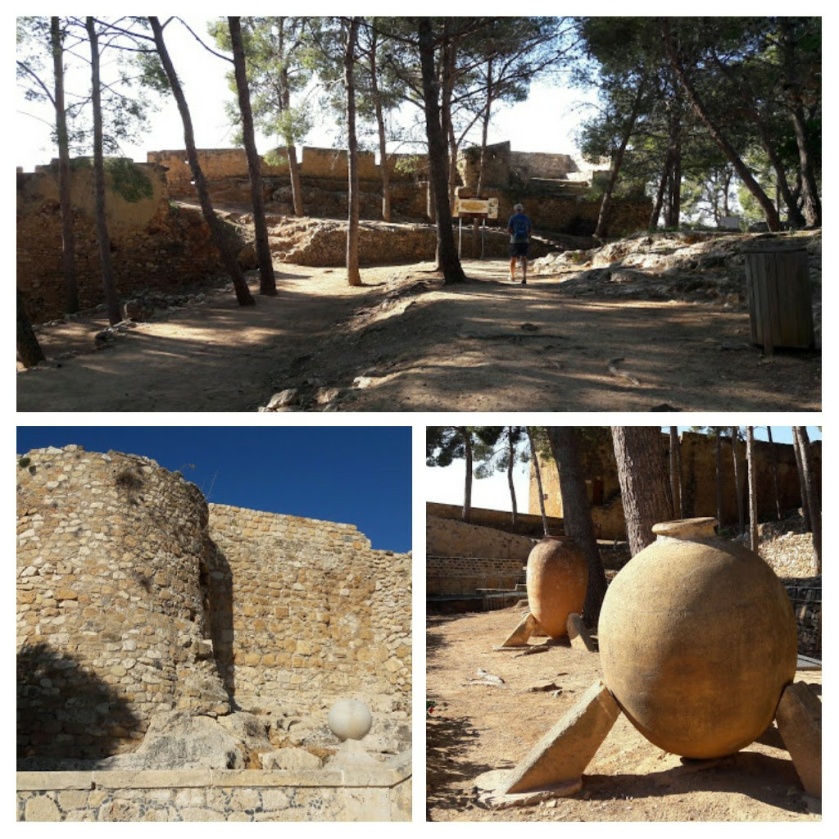 Returning by way of the marina we sat in the sunshine with a beer and spent the time watching the expensive plastic yachts bobbing on the water and listened to the gulls. 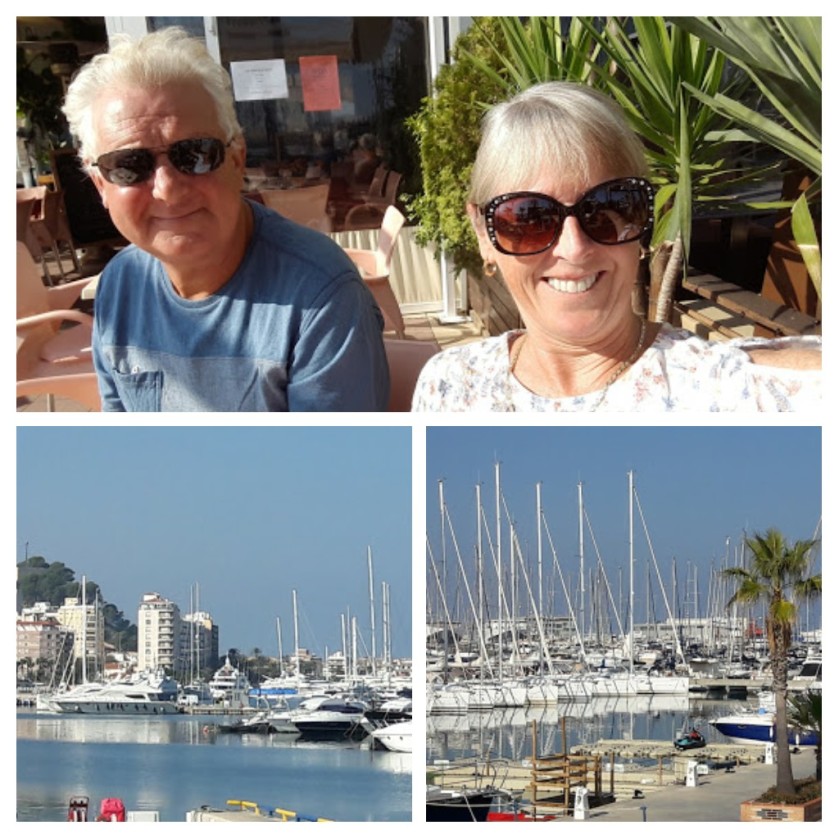 Next day we turned in the opposite direction, it was a little more rural and the rugged cliffs fell away steeply to the sea below, wonderful turquoise blue with darker patches contrasting in the sunlight. Again we walked uphill where the tarmac eventually gave way to a hardcore stoned track took its place. It lead up to the 16th century Torre del Gerro high above us, originally a watchtower at 13.5 meters high, a series of these towers were built along the coast as protection from pirates. The circular tower has a door positioned high on the outside wall, two windows on the opposite side facing the sea, and a staircase inside although it is not permitted to enter. The views take in not only the sea and coastline but the hills behind and more behind them so it was well worth the climb. 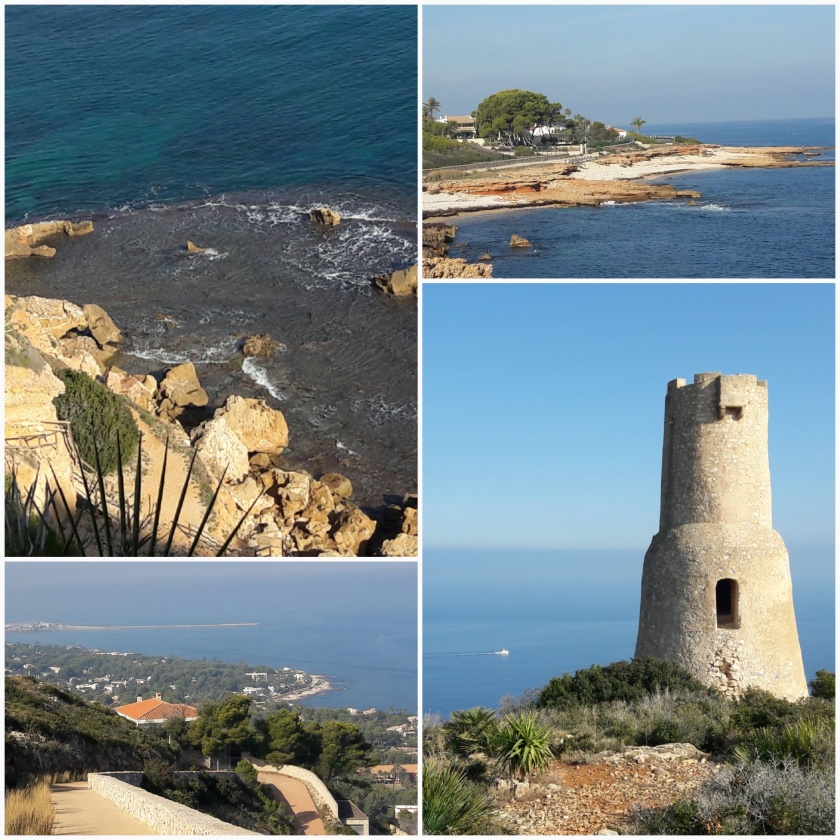 The time finally arrive for our long awaited visit to see our friends Irene and Trevor in Parcent, we last saw them in March when we were on our way back to the UK. As we drove away from the coast into the hills the almond trees and small farms became apparent again and some olive trees had nets spread under them as it is harvest time. Bessie’s temporary home was to be parked next to orange trees with views of the mountains by kind permission of one of a friend of Trevor’s. 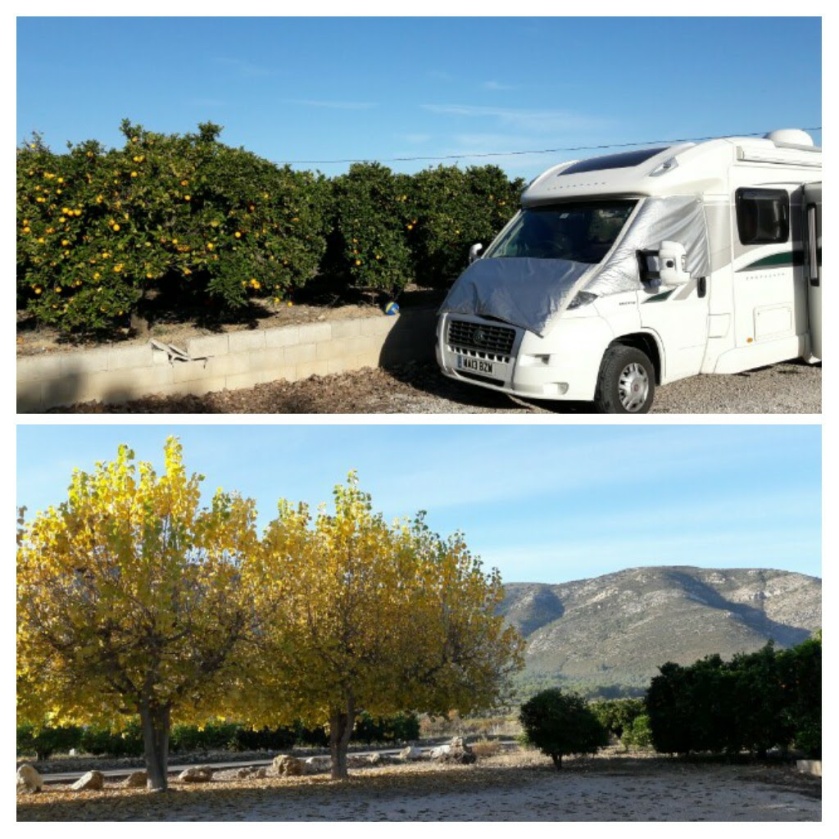 We caught up with each others news over lunch on the roof top terrace of the local Cooperativa; a bar, coffee house, restaurant, meeting place, entertainment hall and the hub of the community. The locals meet most days and if you need some work doing it is the best place to discuss requirements and find the help needed, a true Spanish village community where money may or may not be exchanged, perhaps produce or skills instead. 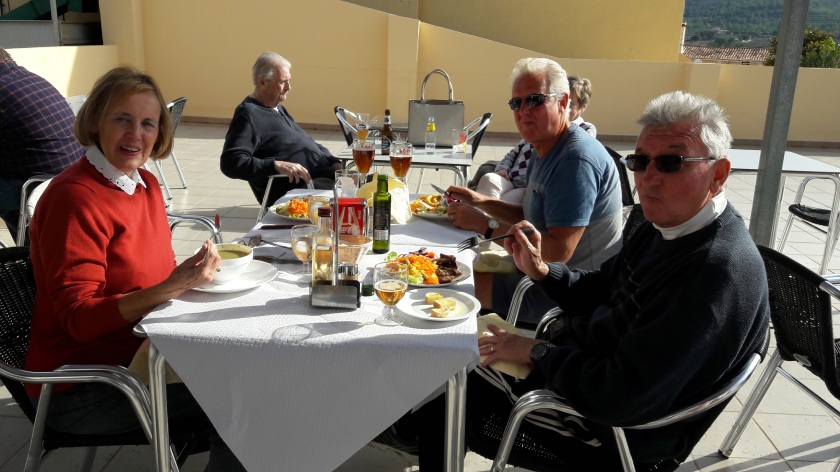 We spent a lovely day together at Moraira in a small coastal bay, looking out over the balustrades and deserted beach and enjoying the best beer battered fish, chips and mushy peas I’ve had in a long while. Back at Parcent the colour of the bougainvillea draped over the wall and arch was so vivid against the sky, the lemon tree had a large crop nearly ripe for picking, many pots had geraniums still flowering and the balcony has views that cover a huge distance. 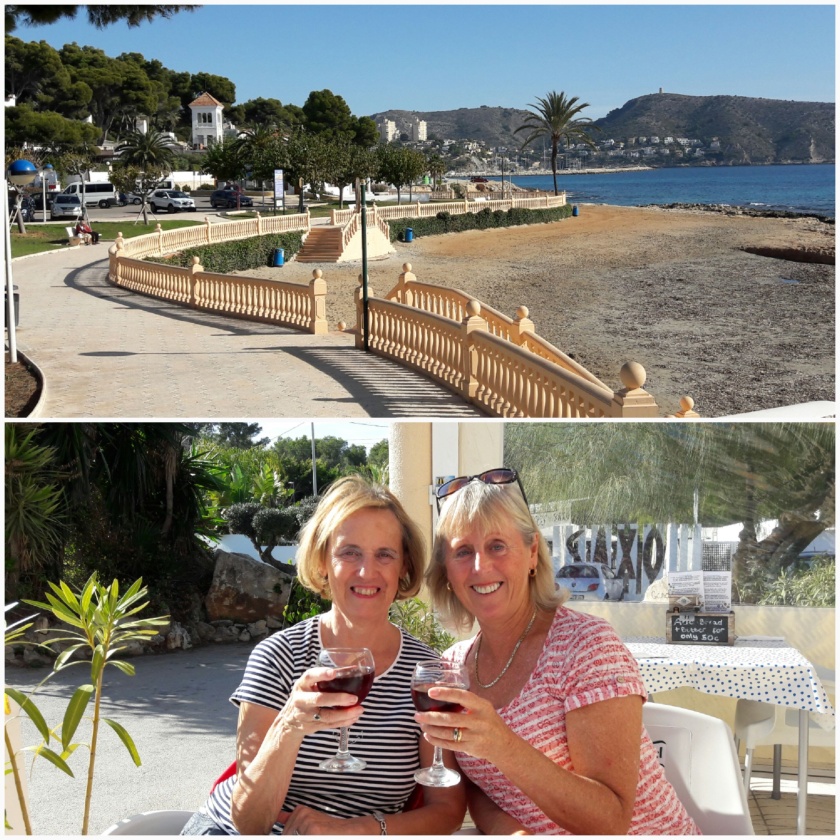 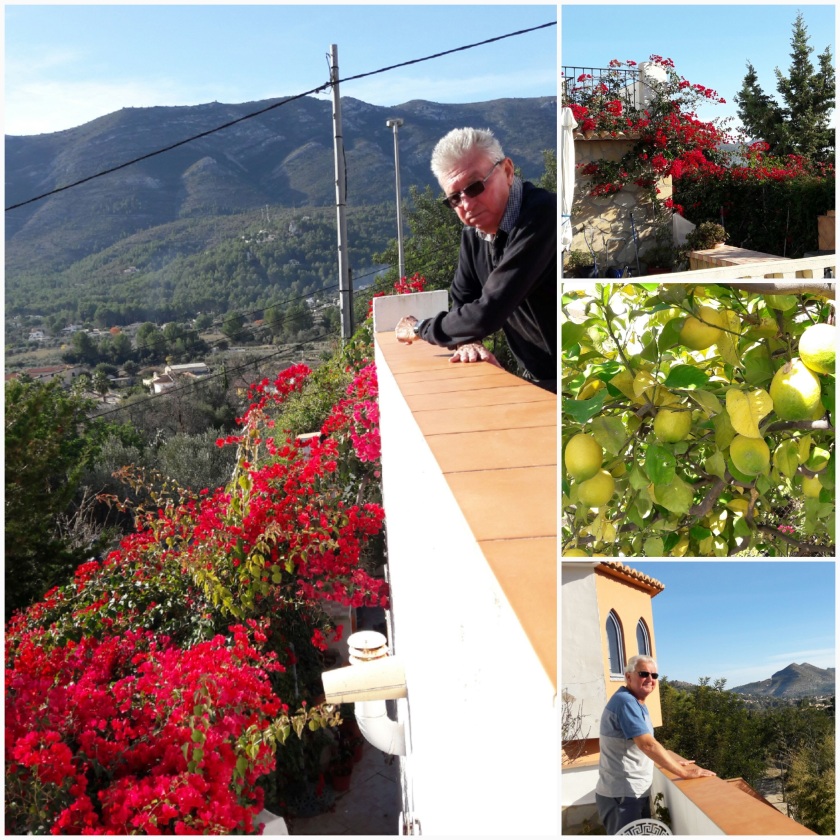 Over our days in Parcent we walked around the area as we had enjoyed it so much on previous visits. Starting in the small square by the church we walked steeply downhill towards the old community Lavadera or public wash-house, crossed the road and up towards the fields and pine trees with scattered farms and houses. I was amazed to see so many wildflowers in late November and we could hear birdsong everywhere. 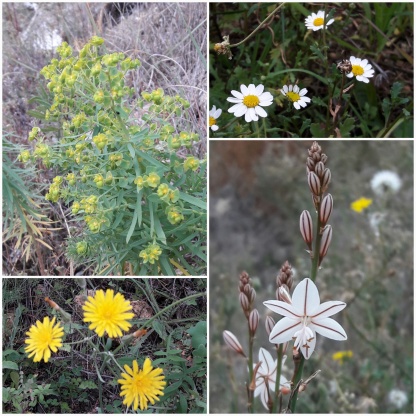 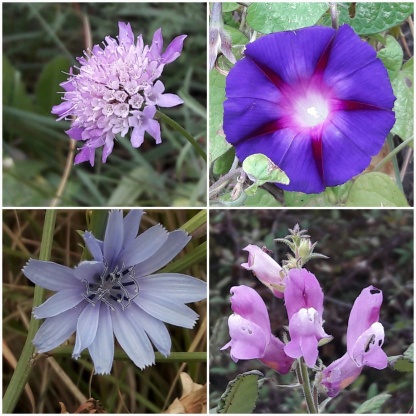 The trees were full of fruit; lemons, oranges, pomegranates and persimmons (or sharon fruit), with unpicked olives that are green or black against the grey foliage. The grape vines had turned red and yellow but weirdly some almond trees had new leaves with unharvested blackened nuts on the high branches, and a few with very early soft pink blossom all on the same tree! We also saw vegetables growing on the plots of land beside a lot of the houses, ripe tomatoes, artichokes and cabbages with new rows of brand beans over a foot high already, lettuce and shallots or small onions. Returning into the village over the bridge there were white roses and pink osteospermums in flower, huge cacti plants and two of those Kapoc trees with the spines and pink flowers I had seen at a previous location. 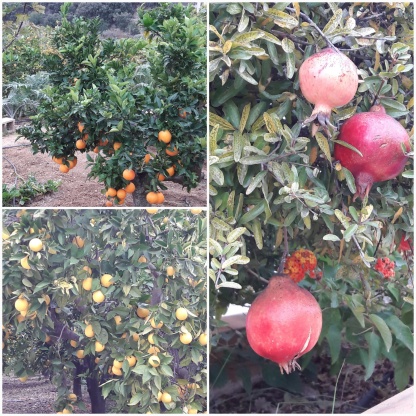 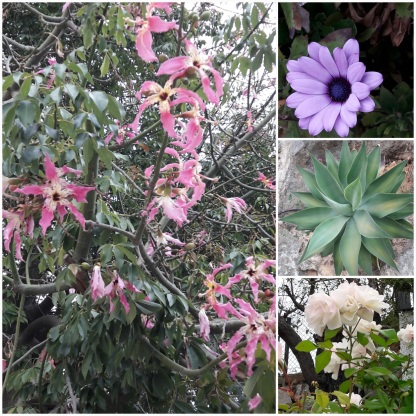 It is olive picking time in the area and we often heard the chug-chug engine noise of the odd looking tractor/rotavator vehicles dragging small trailers. In the back were plastic baskets full of olives and they were heading towards the Cooperativa where each farmer brings their crop to be weighed. The olives are all collected, washed then an elevator loads into large boxes before enough are collected to be taken elsewhere for pressing. Each farmer gets a percentage of olive oil back, relative to his contribution of olives and some of the oil is then sold in the Cooperativa. 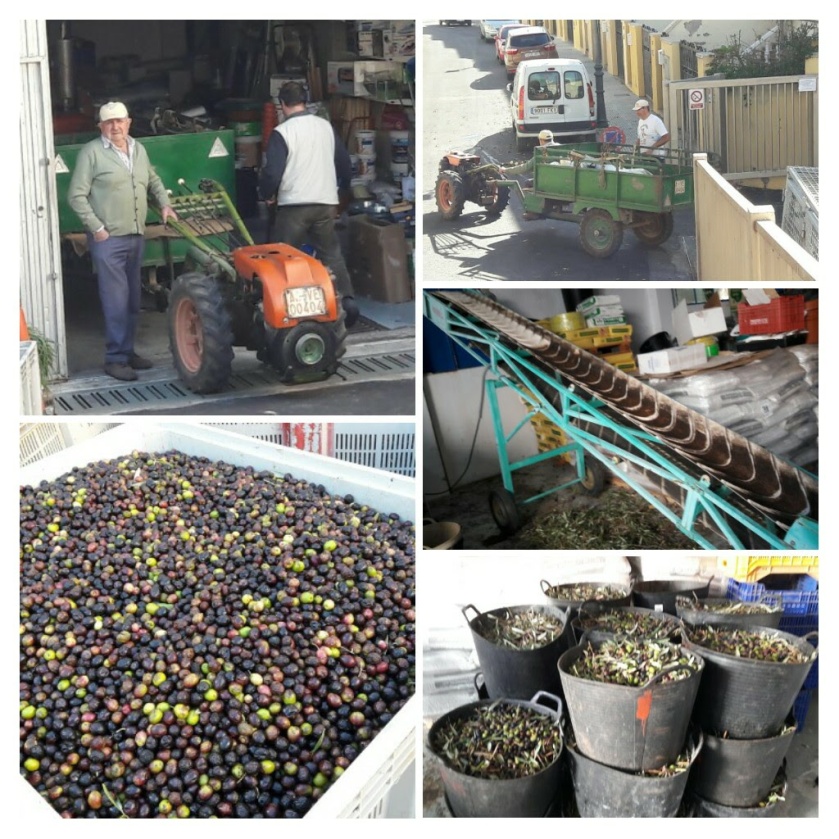 We had a wonderful lunch at the Tramonti Restaurant with Irene and Trevor on our last day in Parcent. The most delicious tomato soup was enhanced by vodka, Worcestershire sauce and tobacco sauce, brought to the table to add your own, and this delight is Trevor’s invention now requested by some of the regulars! 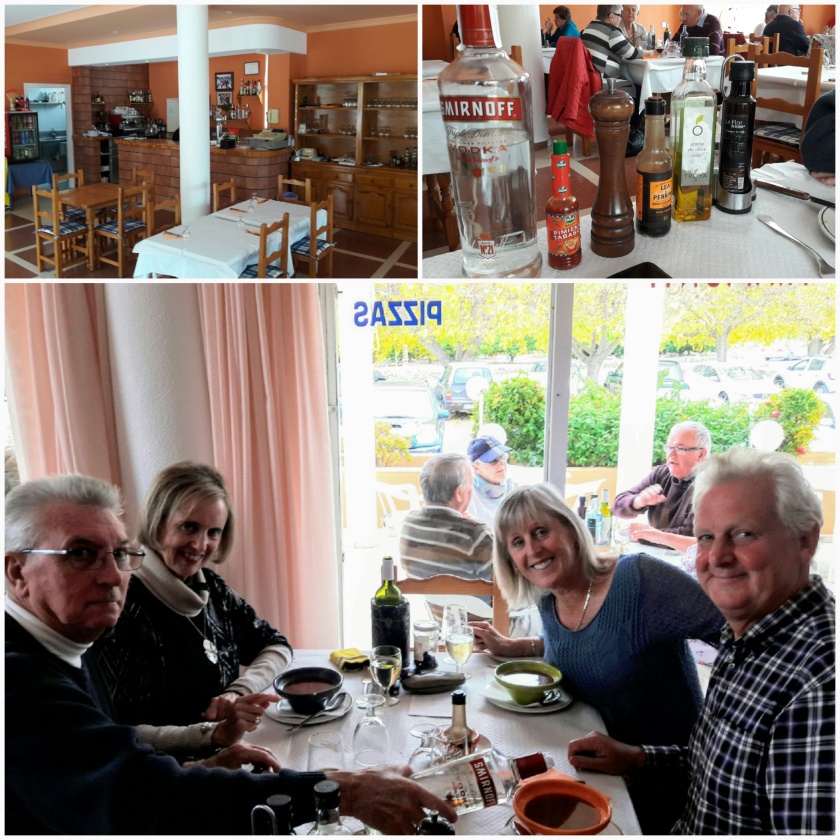 We each had different main courses followed by profiteroles to finish and didn’t eat for the rest of the day. As usual, we spent our evening with Irene and Trevor, drinking and chatting before returning to Bessie each night. We had a fabulous time together and look forward to seeing them again in January. 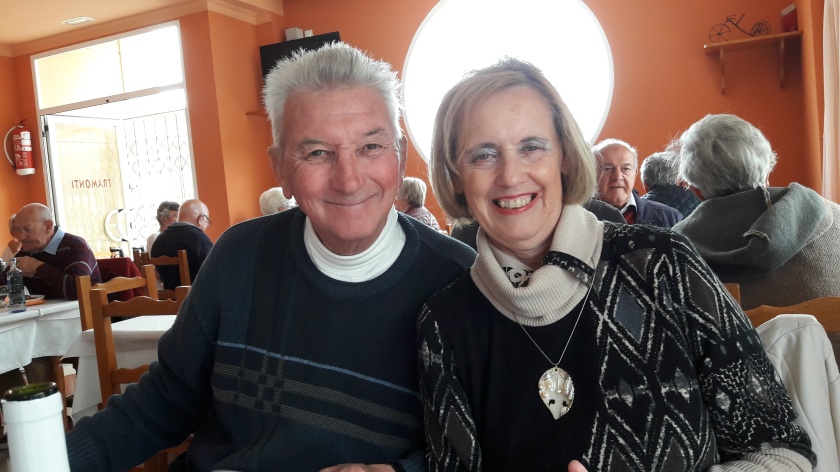 We retired at last and 2017 is the start of our next chapter. We now have a home on wheels in which to travel around Europe, follow the sun and whatever else takes our fancy. View All Posts